Cinnamon Roll Cookies are a playful recipe that gives you the swirl of a cinnamon roll in a cookie bite.  These darling cookies look like cinnamon rolls, taste like a crunchy version of cinnamon rolls, and use a lot of the same techniques as you would in making actual rolls (minus the yeasted dough obviously!).

Other than my cookies not looking exactly like the original recipe’s photo, this difference was not really a problem. The cookies kept the overall shape and tasted really good. I may have liked the plain version even better than the final, iced version.

It’s possible that I have never said those words before– I like icing by the spoonful right out of a bowl!– but these flavorful, cinnamon cookies were just fine without the sweet icing on top. The icing does put a nice finishing touch on the overall cinnamon roll theme so, go ahead, you won’t be disappointed either way.

I followed the recipe from www.cookingchanneltv.com and did not change a thing. I’d love to hear if you try the same recipe and have good results. Next time I will roll the dough in a tighter spiral but even my lack of skill in that step didn’t take away from the enjoyment of these swirled, cinnamon treats.

These look tasty! I find it hard to get rolled cookies rolled up tight enough too, maybe it just takes practice.

I have always wanted to try making these cookies--you did a great job. They are drool-worthy with that glaze!

Thanks, Laura! The glaze was sweet-- just like cinnamon rolls-- but it made it hard to stack the cookies for storage. Even parchment did not help much. I left the glaze off for the cookies I took to the teachers at school so it was easier to transport the cookies and also so that the teachers didn't all have sticky fingers afterwards!

The dough came out really well! Tastes really well! A hit with my family. Will make this again. Thanks a lot for sharing this recipe. :)

So very glad you enjoyed these!

I made some of these a few years ago and they were the hit of the Christmas cookie tins I gave to my neighbors. I also love the orange cinnamon version of these too. They are a delight.

Good idea, Karen, maybe these will be made again to share with neighbors. I think they would pack well too so that I could send them to my grandmothers.

I have always had issues with slicing rolled out cookie dough but yours look perfect!

Yes, I have that trouble too-- I think freezing the dough really makes a big difference so that when you cut through the rolled dough it does not squish down too much. 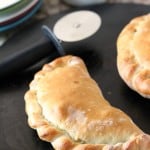 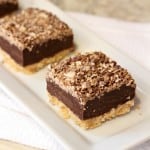